On the Fate of the Jokake Inn 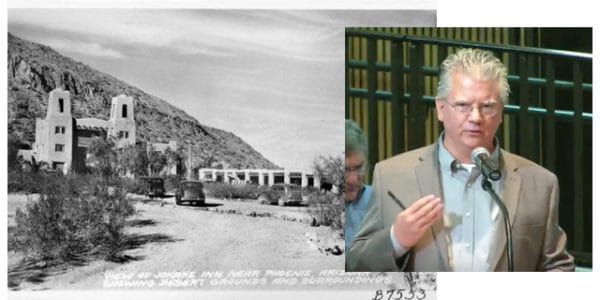 On October 4th 2017, the Phoenix City Council voted 7-2 to approve the Planned Use Development (PUD) for the further development of the Phoenician Resort. The approval will allow the previously entitled 321 “residential units” to be constructed, as well as an additional 37 “residential units”, not previously entitled. I attended the hearing, and spoke in favor of the City moving to officially protect the Jokake Inn, as part of the agreement with the Owner that the PUD represents. Three other people stood up to speak on behalf of the Jokake Inn – a total of four people, in a city of four and a half million people.

While I don’t expect that many people would be able to take the afternoon off from work to sit through a 2 hour City Council meeting, I’m surprised that none of the “official preservation people” in the city or state spoke, or even attended the hearing. The Jokake is one of the more iconic historical structures that remain in the Phoenix Metro area – and its history is a story book “David vs Goliath” tale – the poor old noble and ignored Jokake Inn (last vestige of an Arizona landmark left un-destroyed by Charles Keating) vs the developers who are pushing to build even more than the huge allotment they already had. Not showing up to work with that scenario with some amount of creativity seems like a huge missed opportunity. The “official preservation people” should have some weight – I think that merely by showing up, and giving even a milquetoast “This is important issue that demands the Council’s attention” type statement, they could have moved the debate a bit further.

I respect that the owners of the Phoenician in fact own the property, and should largely be free to develop it how they see fit. I respect that the Phoenician needs to be allowed to expand, grow, and improve itself, lest it become an abandoned eyesore, as happened to other once-respected hospitality properties. I’m an architect, so of course I love it when owners plan resorts, pay architects to draw them, pay contractors to build them, and then charge people money to stay in them. I’m very proud of the small role I played in the re-birth of the Royal Palms Resort. But, given the history of the property, especially the razing of most of the Jokake Inn and the Paradise Inn in the late 1980s, it seemed appropriate that the City Council could have pushed back a bit harder on the Jokake, especially in light of the 10% increase in “residential units” that the Phoenician was seeking. Councilman Sal DiCiccio, noted that the Phoenician would be a $300 million dollar construction project that would benefit the City, which I agree with and applaud. But those additional 37 units likely represent an additional $27 million dollars of additional build-out value to the Phoenician (and that’s considering a minimum “unit value” of $750,000, which is probably low). Given that, I believe that the City could negotiated harder early on in its discussions with the Phoenician. Would a 38th extra unit have been enough to get them to agree to an official historic designation? We’ll never know.

The City of Phoenix has a Historic Preservation Office – it’s the “third branch” of the City’s Planning and Development Department. At a minimum, the city planning staff should have seen the Jokake on an aerial that they were looking at during some meeting, and informed their co-workers over at the HPO about it. It is probably too much to expect that the HPO would have heard about the Phoenician PUD in passing on their own, and thought “Phoenician . . . Jokake Inn . . . hey WAIT!”, and burst into a smoke filled meeting somewhere, but we can always dream. In fairness, the Historic Preservation Officer of the City of Phoenix did speak briefly to the Council, to announce the two stipulations which were added as part of the PUD:

“The property owner shall complete HABS/HAER/HALS documentation of the Jokake Inn prior to the approval of any building permits for a new residential unit. Documentation shall be completed consistent with the Secretary of Interior’s standards and guidelines for architectural and engineering documentation and submitted to the Historic Preservation Office for review and comment prior to submittal to the National Parks Service.

The property owner shall maintain the existing structural integrity of the Jokake Inn in good condition and repair for a period of no less than ten years from City Council approval of the PUD.”

I understand that the City could have unilaterally imposed a 1 (or possibly 3) year moratorium on demolition. I’m not an expert on these matters, and I don’t know at this point what would have been best, but at least there some was some discussion about it, and some assurances were given. The cynic in me thinks that if we’d done nothing, the Phoenician would have filed for a demolition permit the day after the PUD was approved. So I guess the cynic in me has to regard the “10 year stay of execution” as some sort of positive; while acknowledging that the writing could be on the wall for the day after that 10 year period expires. Perhaps in the next 10 years, some will take a shine to the building, and the opportunity that it represents. I see that the Phoenician features the Jokake Inn on Instagram now and again, so I hope that they move to repair the building, and hopefully for longer than 10 years . . .

What I am 100% sure of is that, if the City of Phoenix would have, on “day one” of the PUD process, identified the Jokake Inn as the significant architectural/historical landmark that it is, a far better resolution to its fate would have been reached, and likely in a far more amicable environment. As someone noted during the hearing, there are pages upon pages in the Phoenix Town Code and General Plan about historic preservation – the Jokake Inn certainly “ticked all the boxes” in terms of being important, and worthy of a sustained effort by the City to secure its existence.

In the Phoenix New Times